Here are some LG G5 Home Screen tips on how to navigate on your LG G5 smartphone.
• Do not press too hard; the tap screen is sensitive enough to pick up a light, yet firm tap.
• Use the tip of your finger to tap the option you want. Be careful not to tap any other buttons.

The LG G5 Home Screen is the starting point for many and functions. It allows you to add items like app shortcuts and Google widgets to give you instant access to information and applications. This is the default canvas and accessible from any menu by tapping 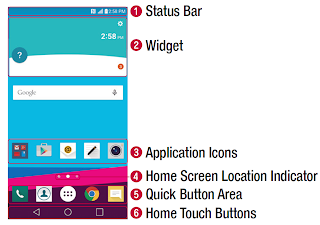 Recent Apps Button
Displays recently used applications. If you touch and hold this key, it opens a menu of available options.

Customizing the LG G5 Home screen
You can customize your Home screen by adding apps and widgets and changing wallpapers.

1 Touch and hold the empty part of the Home screen.
2 Choose the Apps or Widgets tab and tap the desired item.
3 Drag it to the desired location and lift your fi nger.

LG G5 TIPs To add an application icon to the Home screen from the Apps screen, touch and hold the application you want to add. Read more LG G5 User Guide Manual

Removing an item from the LG G5 Home screen
• While on the Home screen, touch and hold the icon you want to remove, then drag it to and release it.

Adding an app as a LG G5 Quick Button
• From the Apps LG G5 screen or on the Home screen, touch and hold an application icon and drag it to the Quick Button area. Then release it in the desired location. Up to 6 apps can be added.

Removing an app from the LG G5 Quick Button area
• Touch and hold the desired Quick Button, drag it to , and release it.

Customizing app icons on the LG G5 Home screen
Returning to recently-used applications
1 Tap Recent App previews of recently used applications will be displayed.
2 Tap an app preview to open the application. Or tap back button to return to the LG G5 previous screen.

The LG G5 is bundled with Android 6.0 "Marshmallow". Citing confusion between removing shortcuts to apps and uninstalling them entirely, the G5's home screen does not feature an "app drawer", and instead places all apps on pages of the main home screen similarly to iOS and other custom Android distributions. LG G5 does not support Android Marshmallow's "adopted storage" feature. Due to financial conditions and advisories by local carriers, the LG G5 is downgraded for the Latin America market to use the slower, octa-core Snapdragon 652, and only includes 3 GB of LPDDR3 RAM. LG G5 Manualtutorilas Advertisement