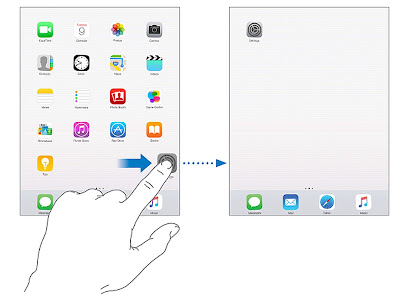 iPad Pro Tutorial to Customize your iPad Pro. The new 9.7‑inch iPad Pro has a True Tone display. It uses advanced four-channel ambient light sensors to automatically adapt the color and intensity of the display to match the light in your environment. Which means reading is more natural and comfortable almost like looking at a sheet of paper.

The 64-bit A9X chip gives iPad Pro the power to easily take on tasks once reserved for workstations and PCs. Not to mention tasks you’d never consider doing on a PC. Despite this barrier-breaking performance, the A9X chip’s efficient architecture enables up to 10 hours of battery life

iPad Pro Tutorial Arrange apps.
Touch and hold any app on the Home screen until it jiggles, then drag apps around. Drag an app to the edge of the screen to move it to a different Home screen, or to the Dock at the bottom of the screen. Press the Home button to save your arrangement.

iPad Pro User Guide Create a new Home screen.
While arranging apps, drag an app to the right edge of the last Home screen. The dots above the Dock show which of your Home screens you’re viewing.
When iPad Pro is connected to your computer, you can customize the Home screen using iTunes. In iTunes, select iPad Pro, then click Apps.
Start over. Go to Settings > General > Reset, then tap Reset iPad Pro Home Screen Layout to return the iPad Pro Home screen and apps to their original layout. Folders are removed and the original wallpaper is restored.

iPad Pro Tutorial Create a folder.
While arranging apps, drag one app onto another. Tap the name of the folder to rename it. Drag apps to add or remove them. Press the Home button when you finish. You can have multiple pages of apps in a folder.

iPad Pro Tutorial Delete a folder.
Drag out all the apps—the folder is deleted automatically.
Wallpaper settings let you set an image or photo as wallpaper for the Lock screen or Home screen. You can choose from dynamic and still images.